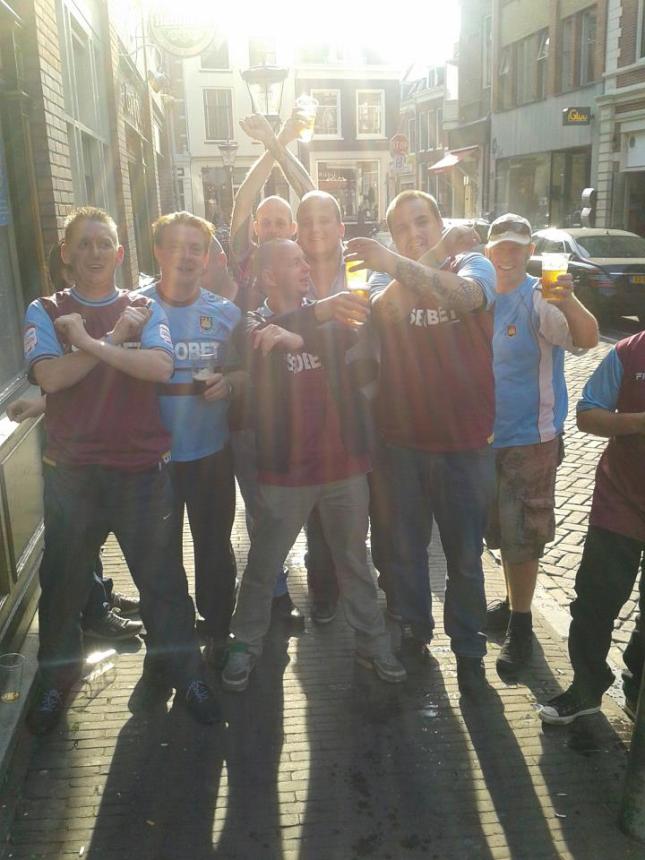 West Ham co-owner David Gold claims the club’s promotion back to the Premier League has brought vital pride back to Upton Park.

The Hammers secured their return to the top flight – and the estimated £90million that comes with it – after beating Blackpool 2-1 in Saturday’s play-off final at Wembley.

Gold said: “It’s brought back pride to the football club.

“People talk about money but pride is so important. We’ve had a tough time – the previous owners caused problems for the football club and we got relegated so this is about pride.

“People say it’s the richest game in the world and it is – but what we miss is the impact it has on the fans. It’s vital that this club, with all its tradition, is back in the Premier League.”

West Ham manager Sam Allardyce says he is looking “beyond fourth from bottom” ahead of next season’s Premier League campaign.

The Hammers won promotion to the top flight via the play-offs following last weekend’s 2-1 win over Blackpool and Allardyce is now demanding more from his players as they look to cement their status as a Premier League club.
The former Newcastle and Blackburn boss told London 24: “My job will be to try and aim as high as we possibly can in the Premier League.
“Let’s look beyond fourth from bottom, let’s see how far we get. Let’s see if we can build it and sustain it from there.”
Allardyce admitted the 2012-13 campaign will be a tough test for the east Londoners, but that has not dampened his optimism.
He said: “As always in the Premier League it is difficult to get results.
“There will be times when we get turned over and lose 3-0 or 4-0, in year one that can happen.
“But you have to accept it and not let it affect you because at the end of the day whether it is 1-0 or 6-0 you have still only lost three points.”

West Ham defender Winston Reid is looking forward to Premier League football after a dogged campaign in the Championship.

The 23-year-old was part of the Hammers side that sealed promotion to the top flight with a win over Blackpool in the play-off final.

It was just rewards for the New Zealand international, who went through a transitional phase last term following his arrival in east London.

“It’s been a tough, long year with so many games and I’m really looking forward to next year now,” he told the club’s official website.

The Hammers had been the bookmakers’ favourites to claim automatic promotion and for long periods of the campaign looked like they would achieve that goal.

However, a late slump in form allowed Reading and Southampton to claim the automatic places, forcing Sam Allardyce’s side to contest the lottery of the play-offs.

But Reid was full of praise for the way his team-mates dealt with the pressure as they returned to the elite division of English football.

“We have been under pressure all year and to finally get promotion it’s amazing,” he added.

“Saturday was for the fans – all season they have been amazing and they really deserve to be in the Premier League and we have pulled it off.”

BROOKING: TIME IS OF THE ESSENCE

Sir Trevor Brooking accepts new England manager Roy Hodgson would probably have liked more time to prepare for Euro 2012 – but is in no doubt the players will know just what is expected of them when they tackle France in Donetsk on June 11.

Hodgson will meet up with the squad for the first time in Manchester on Wednesday afternoon, having allowed players to take a short break. Chelsea’s John Terry, Ashley Cole, Frank Lampard and Gary Cahill – plus stand-by player Daniel Sturridge – have been given extra time off after the Blues’ Champions League final victory.

“Roy is an experienced coach, but I am sure if you asked him he would say he wanted longer in the job to prepare the side,” said Brooking.

The former West Brom boss will have just 19 days, with friendlies against Norway and Belgium, to fine tune his plans ahead of their Group D opener.

Brooking added: “Chelsea did really well and we congratulate them on their Champions League success, but it does mean some of their lads will be coming in after the first warm-up game and I know there are three or four injuries as well at present.

“Maybe the game against Norway in Oslo is more about giving all the squad members a chance to play and even some of the standby players who at present will be wanting to show their worth to Roy for the future.”

Brooking told Press Association Sport: “They meet up on June 5 and fly out on the 6th and then the first game against France is a really tough one, but by then everyone will know what is needed from them.

“It is about trying to get off to a good start, we all know group situations are pretty tight and looking at the group they will be very close affairs.”

According to reports Blackburn Rovers are expected to sell goalkeeper Paul Robinson this summer.

It is understood that London clubs QPR and West Ham United will battle it out for Robinson who is Rovers’ highest earner on £40,000 a week.

The shrewd clubs in the transfer market always keep an eye out for those who have grown a little frustrated at home. Three players who could well be up for a new adventure this summer, for a variety of reasons, are Tottenham’s Gareth Bale, Liverpool’s Joe Cole, and Grant Holt of Norwich. The Life’s A Pitch team looks at the rumours linking Bale with Barcelona, Cole with Reading and West Ham, and Holt with Sunderland and Everton, and marks each out of 10 for probability.

“We know that Barcelona are very much interested in Gareth Bale: they want to get a new left back,” says the Daily Telegraph’s Jason Burt over rumours of a £36million switch. ”Do they have the money to spend this amount on him? I’m not so sure. [Bale’s agent] Jonathan Barnett is saying more than £36million, and we know [Tottenham chairman] Daniel Levy will drive a hard bargain. That’s a high figure for Barcelona. I’ll give it a six.”

From one player possibly moving abroad, to one in line to return. Liverpool’s Joe Cole, on loan at Lille, has been talked about regarding a move to either Reading or former club West Ham. “I’d give that a decent chance: a six pushing a seven,” says the Daily Mirror’s John Cross. “Joe Cole is an in-demand player, he’s had a decent season at Lille and I think he’s still got an eye on the Premier League. In recent interviews he’s dropped a few hints here and there, hankering for home.”

But the most likely of all three possible transfers will be Grant Holt, says The People’s Tom Hopkinson, unless Norwich improve his contract. “I think it’s got a very good chance of happening, unless Norwich can get in there and offer him a new deal. This is totally about the financial situation. He’s not on great money, compared to a lot of his Premier League peers, having scored more goals than a lot of them.”

Sam Allardyce has began reshaping his Hammers side ahead of their return to the Premier League, with the former Aston Villa forward included in those not offered new deals

West Ham United have released six players as manager Sam Allardyce prepares to lead his team back into the Premier League.

Faubert, who joined the Hammers in 2007, is jettisoned despite playing 34 games in 2011-12, including Saturday’s play-off final win against Blackpool.

Neither Carew or Diop have started a game since January, while Faye’s last appearance came back in April in the 3-3 draw with Birmingham at Upton Park.

The Norwegian only managed two goals in his time with West Ham and, following the January arrivals of Ricardo Vaz Te and Nicky Maynard, he was pushed further down the pecking order.

Fellow striker Nouble has also been released after spending the majority of the season on loan with Gillingham, failing to impress on his only Hammers appearance on New Year’s Eve against Derby.

“The six professionals have all played their part in a successful 2011-12 season which saw the Hammers gain promotion back to the Premier League.

“West Ham would like to thank all of the aforementioned players for their hard work and dedication and wish them luck in their future careers.”

Midfielder Henry Lansbury has also left the club and returned to Arsenal after his season-long loan came to an end.